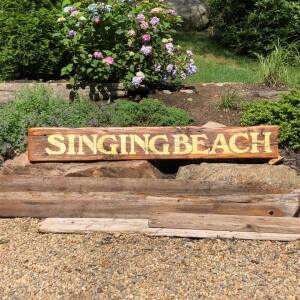 Born in Boston, she was the daughter of Ruth (Burgess) Faulkner and Robert Sheffield Faulkner, Sr. She was raised and educated in Manchester and was a graduate of both Manchester Memorial and Manchester High School. She continued her education at Colby-Sawyer College earning her bachelor’s degree in fine arts and early childhood education.

Lacey had been a nanny for a local family and pre-school teacher at Tara Montessori School in Manchester for many years. Upon starting her own family, she focused her love and efforts on building a wonderful life, alongside her husband, Dan, for their two beautiful children for whom she was ultimately dedicated.

Lacey was a gifted artist and expressed her talents along with her entrepreneurial spirit by founding, Drift Designs, where she created fine art and collectables out of re-finished driftwood. Much of the driftwood she used in her pieces were found during her daily walks at Singing Beach, West Beach and Magnolia. She often could be found walking with her beloved Gigi along the beach or streets of her hometown of Manchester.

Lacey felt especially at home on Martha’s Vineyard, where she was married and spent many vacations and time at her family home over the years. Martha’s Vineyard was part of her soul and she passed along this love to her children.

Above all else, Lacey had an immense ability to love. She was a doting mother and a loving wife, whose love for her family was palpable. Those who were lucky enough to be loved by Lacey had firsthand experience of the care and devotion she put into her close relationships. With her out-going nature and hilarious sense of humor, Lacey lit up a room with her presence. Those who met her, even briefly, always remembered her. Lacey endeared herself to many and had several lifelong friends who were exceptionally dear to her.

Lacey will be forever remembered for her devotion to her children, extraordinary humor, her artistic gifts and creativity, her love of nature and unfettered loyalty to family and close friends.

Lacey is survived by her loving husband of 15 years, Daniel James Rowe, her children, Griffin James Rowe and Madelyn Webber Rowe, her mother, Ruth (Webber) Faulkner, her father, Robert Sheffield Faulkner, Sr. and his partner Irene Resendes, all of Manchester-by-the-Sea, her brother, Robert Sheffield Faulkner, Jr. of Boston, her mother-in-law & father-in-law, James and Barbara Rowe of Walpole, her sister-in-law, Heather Miller and her husband Derick of Wrentham, her nieces, Caroline and Avelia Miller, and many aunts, uncles, cousins and extended family and friends.

ARRANGEMENTS: Relatives and friends are invited to A Celebration of Lacey’s Life to be held at Essex County Club, in Manchester, Friday, July 2nd from 12 noon to 3 P.M. A time for sharing of memories will be held at 1:30 P.M.  All other services are private. Assisting the family with the arrangements is O’Donnell Cremations – Funerals – Celebrations, 167 Maple St., Danvers. In lieu of flowers, expressions of sympathy may be made in Lacey’s memory to a memorial fund set up to help support Griffin and Maddie in their educational and extracurricular endeavors.  To share a memory or offer condolences, please visit https://laceyrowememorialfund.mydagsite.com/ or www.odonnellfuneralservice.com

To send flowers to the family or plant a tree in memory of Elizabeth "Lacey" (Faulkner) Rowe, please visit our floral store.