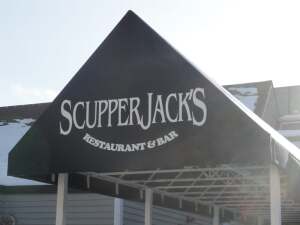 A Life of Family, Restaurants and Boston Sports

Born in Brockton, he was the son of the late Frank Sr. and Shirley (Gammons) Mendosa. He was raised and educated in Brockton and was a graduate of Cardinal Spellman High School. He continued his education at UMass Amherst, attending the Hotel & Restaurant Management program. From there he launched his career in restaurant management with Borel Restaurant Corporation, owners of the Rusty Scupper franchise. Jack spent the next several years opening Rusty Scupper restaurants up and down the east coast, including Baltimore, Boston, New Haven, Stamford, Princeton & Philadelphia.

After Borel was acquired by Stouffer Restaurant Corp, Jack and his family were transferred across the country, including New Jersey, California and Ohio, all while working his way up to a Vice President of the corporation.

In 1992, after Stouffer Restaurant Corp was offered for sale, Jack took his family to Acton, MA to purchase a Rusty Scupper restaurant which he had originally opened in 1973. The restaurant was renamed ScupperJack’s and quickly became a local favorite. All of his children- Jack Jr., Julie, Chris, Andrew and Brad- worked at ScupperJack’s at one point or another. Chris served the longest with Jack and became part-owner. Through Jack’s hard-work at the restaurant, all of his children went through college without having to pay student loans and the family enjoyed many vacations to places such as the US Virgin Islands, Hawaii and Block Island.

In 2011, after nearly 20 years in business, ScupperJack’s closed its doors. Never one to truly “retire”, Jack went back to the restaurant business as a consultant for The Beachead restaurant group, with locations on Block Island and VT.

Throughout his restaurant career, Jack mentored countless individuals, providing both professional and personal advice. He would often pull someone off the restaurant floor and spend as much time as the person needed to sort through issues and give guidance. As a result, Jack was considered a second father and brother to a wide range of people who were blessed to be in Jack’s circle.

Jack’s family was his pride and joy. He spent hours looking at photos of his grandchildren on one of his many iPads. He treasured spending time with his kids and his grandkids, either in person or over FaceTime. Jack’s biggest moment to shine was Christmas. No matter how much you pleaded with him to tone it down—whether the decorations or the amount of presents- he never listened. Jack relished in the excitement shown by his kids and later grandkids on Christmas morning. The sense of togetherness and love, and the hearty meals brought him tremendous joy.

Jack’s second love was all things Boston sports. Be it the Red Sox, the Bruins, the Pats or the Celtics, Jack was all-in, all the time. At one point or another, he held season tickets for each team. Jack’s love for Beantown sports was evident by the ever-growing amount of sports clothing, VHS tapes and later DVR recordings of various games. Like a true New England sports fan, Jack could always be heard cursing out the team, players, and coaches, even while they were winning championships.

Jack also enjoyed playing sports throughout his life, including tennis and basketball. Tennis was the sport he enjoyed the longest. Although he wasn’t the most patient of players, it didn’t stop him from getting on the court every chance he could.

Jack will be remembered for his warm smile, his kindness, his willingness to help others, his great sense of humor and his unwavering love of family and friends.

Jack is survived by his wife, Sharon Mendosa of Concord, his son, Jack Mendosa Jr. and wife, Shannon of Block Island, his daughter, Julie Duffy and husband, Mark of Jupiter Florida, his son, Chris Mendosa of Boston, his son, Andrew Mendosa and wife, Nardia of Jamaica, his son, Brad Mendosa and wife, Misha Lam Mendosa of Hawaii, his sister, Jane Benoit and husband, Joe of Millbury, his brother, James and wife, Maureen of W. Yarmouth, his sister, Sally O’Neill and husband, Brendan of Brockton, his brother, Thomas and his wife, Deborah of Hudson, Ohio, his late brother Frank Jr of W. Yarmouth, Gail Heinz (mother of Jack Jr & Julie Duffy) and husband, Denny, his grandchildren, Joseph and Vito Mendosa of Littleton, Ma, Luke, Keelan and Liam Duffy of Jupiter Florida, Nash, Jett and Nesta Mendosa of Jamaica and Boston, Kai and Mahina Mendosa of Hawaii.

ARRANGEMENTS: Relatives and friends are invited to join the family remotely for a Jack's Memorial Service at www.odonnellfuneralservice.com, on Monday, March 29th at 2 P.M. It will be streamed live for virtual viewing starting at 2 P.M.. It will be Tribucast (Livestreamed), you can join them here: https://client.tribucast.com/tcid/20581546 or by clicking the link below. Assisting the family with the arrangements is the Peterson-O'Donnell Funeral Home, 167 Maple St., Danvers, MA 01923. In lieu of flowers, expressions of sympathy may be made in Jack’s memory by mail to the Massachusetts Restaurant Association, 160 East Main St. - Suite 2, Westborough, MA, 01581. To share a memory or offer a condolence, please visit www.odonnellfuneralservice.com

To send flowers to the family or plant a tree in memory of John "Jack" E. Mendosa, please visit our floral store.

Video is available for this event

Please note
Please do not visit the funeral home. All services are remote and can be joined by clicking the link above.
Share a memory
© 2021 O'Donnell - Cremations - Funerals - Celebrations. All Rights Reserved. Funeral Home website by CFS & TA | Terms of Use | Privacy Policy