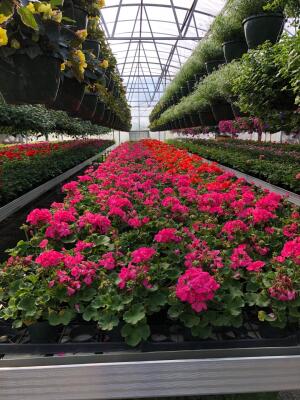 DANVERS – Lee H. "Peter" Gibney, 77, passed away peacefully after his valiant six-month fight with cancer, his loving and devoted girlfriend, Ellen Talkowsky, was by his side.

Peter was raised in Danvers, the son of Dorothy Hunt and was a graduate of the Essex Agriculture High School. He was the founder of Gibney Gardens in Danvers which has been in operation for over forty years. The farm stand was well-known for its beautiful flowers, vegetables and fall and Christmas season offerings. Gibney Gardens was a favorite stop for so many at the Marblehead and Salem Farmers Markets. Peter’s commitment to and support of agriculture led him to serve on the Danvers Agriculture Commission, Essex County Farm Bureau, where he served as President for many years and also served on the Board of Directors of the Massachusetts Farm Bureau Federation.

Peter’s love for flowers and his growing expertise won him many prize ribbons at the Topsfield Fair. He became the Superintendent of the Flower Building, where he enjoyed working with his dedicated group of volunteers and garden sponsors. He was later named a member of the Board of Directors of the Essex Agricultural Society (Topsfield Fair), where he also served as its President.

Peter was a member of the Danvers Polish Club; he always enjoyed the annual ‘Ski Club’ dinner and raffle. He donated Christmas trees and wreaths to the annual "Santa by the Sea" event in Danvers and was generous to many other local charities and causes. For many years, his silver queen cornstalks could be found decorating Salem during its annual Haunted Happenings celebration in October and his beautiful hanging baskets adorned Danvers Square during the last two summer seasons. He enjoyed his numerous trips to Las Vegas and San Antonio while attending the International Association of Fairs and Expositions (IAFE) annual conventions with his fellow board members from the Topsfield Fair.  He was an avid NASCAR enthusiast and he enjoyed attending races at area speedways, especially when super modified divisions were featured, watching racing on television and even raced in his younger years.  He also had an amazing memory and immense knowledge of the sport.

Most of all Peter will be remembered for his good nature, warm smile, and kind heart. He will be missed by all those who loved him.

We would like to thank the staff and medical teams at Beth Israel Deaconess Medical Center, especially Dr. Bruno Bockorny and Nurse Kelsey Trillo.

ARRANGEMENTS: Due to COVID 19 restrictions his funeral will be private and a celebration of his life will be held when it is safe to do so. Assisting the family with the arrangements is the Peterson-O’Donnell Funeral Home, 167 Maple St., (rte 62) Danvers. In lieu of flowers, donations in Peter’s memory may be made to the Essex Agriculture Scholarship Fund, Topsfield Fair, P.O. Box 134, Topsfield, MA 01983-0234. Sharing written remembrances and condolences, during this time will be essential in helping reminisce, celebrate and heal. We encourage you to share your memories by visiting his eternal tribute at www.odonnellfuneralservice.com.

To send flowers to the family or plant a tree in memory of Lee H. "Peter" Gibney, please visit our floral store.