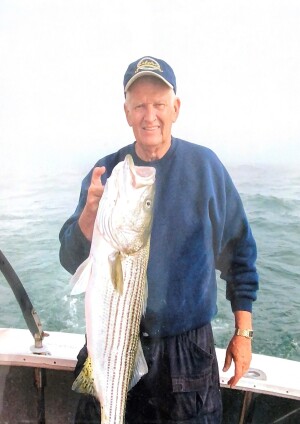 DANVERS – Mr. Paul H. Brown, 81 of Danvers, beloved husband of the late Meredith (Stewart) Brown and longtime companion of Carol Finkenaur passed away peacefully on Friday, May 14, 2021 at the Linden in Danvers.

Born in Danvers, Paul was the son of the late Homer and Lois (Sweeny) Brown. Raised and educated in Danvers, Paul graduated from the former Holten Richmond High School class of 1957. He proudly served his country as a member of the United States Army and upon his honorable discharge, he continued his education at Northeastern University earning his Bachelor’s degree in Business Administration.

Paul dedicated his professional career to shoes, starting with United Shoe Manufacturing Corp. He then worked for Stride Rite Corporation and most recently as the Vice President of Rockport Shoes until the time of his retirement. Paul loved the community he worked with and took great pride in seeing the generations of children and adults wearing the shoes he devoted his career to.

An avid, lifelong fisherman, Paul spent his free time on the ocean, sport fishing. He loved the freedom of the sea and the challenge of landing a fish after a good fight. Always willing to give back to his community, Paul in retirement dedicated his time with Danvers People to People Food Pantry. He was a devoted family man and will be deeply missed by all who knew and loved him.

In addition to his longtime companion Carol Finkenaur of Danvers, Paul is survived by his sons, Todd Brown and his wife, Ebony of Boston and Eric Brown and his wife, Teresa of Danvers, his grandchildren, Kayda and Campbell Brown both of Danvers, his sister, Susan Harrison and her husband, Jim of Beverly, sister-in-law, Anne Marie Brown of Danvers and many nieces and nephews. Paul was the brother of the late Patricia Frohman, Norma Brown, Bette Best, Jacqueline Getchell, Evelyn Flemming, Tommy Brown, Bobby Brown, Earl Brown, Richard “Dickie” Brown and Roger Brown.

ARRANGEMENTS: Relatives and friends are invited to attend visiting hours in the Peterson-O’Donnell Funeral Home, 167 Maple St., (Rte. 62) Danvers on Wednesday, May 19th from 10 A.M. to 12 (Noon). All are required to wear face coverings and to practice social distancing. A private funeral service will be held for immediate family. Burial in Puritan Lawn Memorial Park, Peabody. In lieu of flowers, donations in Paul’s memory may be made to Danvers People to People Food Panty, 12 Sylvan St., Danvers, MA 01923 or to the Alzheimer’s Association, 225 N. Michigan Ave., Fl. 17, Chicago, IL 60601. At the request of the family, please do not send flowers. To share a memory or offer a condolence, please visit www.odonnellfuneralservice.com.