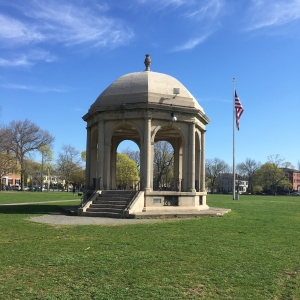 Born in Salem, she was the daughter of the late Joseph and Georgiana (Dragon) Brunet. She was raised and educated in Salem and attended Salem Public Schools.

Mrs. Johansson had been employed for many years at the former Salem Laundry as a Presser and later by Whyte’s Laundry in Lynn for several years.

A lifelong resident of the City of Salem, Rita never drove a car, she could often be seen walking throughout many neighborhoods doing her daily errands. She enjoyed the Salem Common and was there most days, where she would stop and chat with some of the other regular visitors. In her younger years, Rita enjoyed going to the Salem Armory where she would listen to the Big Bands play, shopping at Almy’s, and watching wrestling and football. Rita was a good cook and loved to prepare meals for her family. She will be fondly remembered for her “no nonsense” outlook on life and deeply missed by her family.

ARRANGEMENTS: Relatives and friends are invited to her Funeral Service which will be held at O’Donnell Cremations – Funerals – Celebrations, 84 Washington Sq., (at Salem Common) SALEM on Friday, October 1st at 12:30 P.M. All guests are kindly asked to wear face coverings. Burial in St. Mary’s Cemetery, Salem. To share a memory or offer a condolence, please visit www.odonnellfuneralservice.com

To send flowers to the family or plant a tree in memory of Rita (Brunet) Johansson, please visit our floral store.