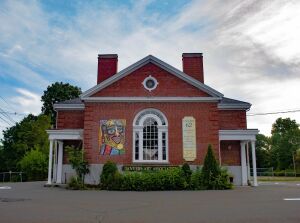 The world and our family lost a vibrant and caring soul with the death of Virginia C. (Hooper) Simpson-Roy on November 13, 2021 at the age of 88.

“Ginny,” as she was known to one and all, was the daughter of G. Madelyn and Vernon C. Hooper. She grew up in Essex and graduated from Gloucester High School, where her father was a popular teacher and third-floor headmaster for more than four decades. A born caregiver, Ginny went on to North Shore Babies Hospital in Salem, training to help parents look after their ailing newborns at home.

She married her high school sweetheart — and next-door neighbor — Harry E. Simpson. They settled in Danvers and had two sons, Harry and Steven; and a daughter, Christine. Ever outgoing and sociable, Ginny was like a second mother to many of her kids’ friends; her all-you-can-eat pancake breakfasts, served on the patio, were legendary.

In her early 40s, Ginny reinvented herself to keep home and family together as a single parent. Her résumé included cooking with her Polish pal, Helen, to supply golumpkis to Romie’s in Danvers and hors d’oeuvres to Wenham Tea House as well as working at her kitchen table to thread together heating elements for a local electronics company. She came into her own, career-wise, upon earning a real state license. Matching people with their dream home was immensely satisfying and a perfect fit with her bubbly personality and flair for storytelling.

A neighborhood house party in the 1970s introduced Ginny to Boston College alumnus Roger C. Roy, who became her partner until his death in 2020. The two were fixtures at B.C. football games, tailgating with friends. They loved dancing to Big Band tunes and attending classical music concerts on Cape Ann. A justice of the peace formalized their union in early 2019; the bride and groom were a respective 86 and 93 years old.

Ginny’s joie de vivre knew no bounds, even at the risk of embarrassing a teenager or three. Like the sick note she wrote — in rhyme — to Steven’s football coach. The foxtrot to organ music she and Roger broke into while shopping at the mall with Christine. Or her lively rendition of “I Always Cook with Honey” as she made lunch for Harry and his friends.

Family and friends shared Ginny with another longtime love. Her passion for — and skills in — oil painting blossomed after retirement. She took art lessons and created dozens of landscapes and family members’ portraits. Moreover, Ginny played a part in establishing the Danvers Art Association at its new quarters in a former school building on Elliot Street. As recently as September, her painting of Rockport Quarry earned third place in the association’s fall show. Every brush stroke conveys her deep affection for the rocky coastline that, however forbidding, was always home.

ARRANGEMENTS: A graveside service and celebration of life gathering are planned for June. Assisting the family with the arrangements is O’Donnell Cremations – Funerals – Celebrations, 167 Maple St., (rte 62) DANVERS. To share a memory or offer a condolence, please visit www.odonnellfuneralservice.com

To send flowers to the family or plant a tree in memory of Virginia C. (Hooper) Simpson-Roy, please visit our floral store.

You can still show your support by sending flowers directly to the family, or by planting a memorial tree in the memory of Virginia C. (Hooper) Simpson-Roy
Share a memory
© 2022 O'Donnell - Cremations - Funerals - Celebrations. All Rights Reserved. Funeral Home website by CFS & TA | Terms of Use | Privacy Policy | Accessibility